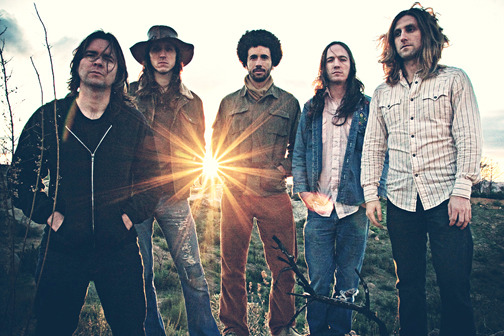 Born in San Diego but bred in the mists of Avalon, Astra have fast-become a synonym for the ethereal, the sublime, and indeed the genuinely progressive. Ever since 2009’s The Weirding put these analog-inflected San Diego visionaries on the map alongside the likes of co-conspirators Earthless, Diagonal and Dungen, who – like some lost tribe of prog faithful - have brought this unwieldly and much maligned form of music out of the dark ages and in front of a new generation of Mellotron-loving cognoscenti. But if this was merely a case of exhibitionism, or some demonstration of holier-than-thou musical knowledge then perhaps Astra would not be discussed in such hushed, reverential tones. But it’s the very humility of their beginnings and the grace of what they’ve created that’s given them the respect of starry-eyed peers, fans, and indeed critics alike who in unison seem to have embraced both the band’s sound and the undeniable integrity of their aspirations.

Beginning their sound experiments under the winter sun of 2006, it wasn’t long before Richard Vaughan (guitar/Mellotron/Moog/vocals), Conor Riley (Mellotron/Moog/organ/piano/vocals), Stuart Sclater (bass), David Hurley (drums/percussion/flute) and Brian Ellis (lead guitar/Moog) had struck upon a new pot of ingredients from which to conjure their enchantments. And if 2009’s debut hinted at the power and grace of their vision, then The Black Chord is perhaps the full realization of their spellbinding prowess. And oh, how their latest outing thrills. Like a Meddle-era ‘Floyd supercharged by a Mahavishnu-intensity not seen for eons, The Black Chord is an album of blinding light and abysmal shade, of bone-jarring rhythmic density and vast, breathtaking mental vistas: nothing less than an epic journey through the outer reaches of musical possibility tinged by an elegance and knowingness that suggests a creative maturity beyond the members’ collective years. Therein lies their redemption, because this is a record at home in 1972 as it is in 2012. Think wailing guitars and dulcet harmonies thickened by Mellotrons and given hypnotic qualities by the kind of drumming that borders on the shamanic. Cinematic in scope but frequently yielding to a kind of melodic fragility that can only be the product of genuine emotion, The Black Chord’s musical ebb and flow prove Astra to be a band’s band capable of an artistry all-too-rare among their generation, and it’s a sound to behold.

ASTRA released their debut album entitled The Weirding in 2009 on Rise Above Records in the UK and on Metal Blade Records in the USA. Their new, follow up, full length album The Black Chord was released in April of 2012.

In 2013, original ASTRA drummer David Hurley left the band to pursue other interests. He was replaced by long time friend and amazing drummer Paul Marrone(Radio Moscow, Psicomagia). However, due to some members focusing on other musical projects and some members relocating across the U.S., ASTRA is currently on an indefinite hiatus. They continue to write and play and hope to one day record and release more music together.